A remake of Fox’s Noir I WAKE UP SCREAMING (1941), with Jeanne Crain and Jean Peters reenacting the characters played by Betty Grable and Carole Landis.

Harry Horner had been a student of Preminger in Vienna. His “homage” to the Master is evident from the start. Peters’ portrait is quite reminiscent of Tierney’s, and framed similarly.

Towards the end of the film, Crain and suspect Elliott Reid take refuge in an all-night movie house. The off-screen film is… LAURA, and a portion of the precinct scene is heard. 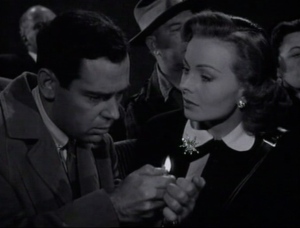 References to Fox classics abound in this rather flat thriller. Among these : Reginald Gardiner quoting from one of Waldo’s lines about trying to be the kindest of men. 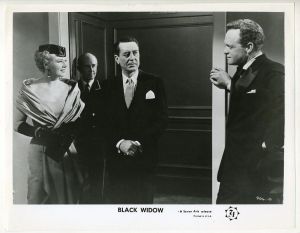 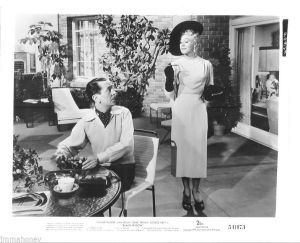 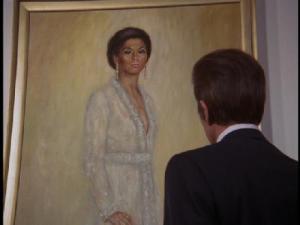 There are more than a few similarities between this episode of the classic TV series and LAURA, starting with the plot: Steve McGarrett (Jack Lord) takes on a ten-year-old missing persons case, after two skeletons are found in a cave. He discovers that the wife of a millionaire industrialist (Herbert Lom) has been missing for ten years, as well as her alleged lover. When McGarrett sees the painting of the industrialist’s wife, he becomes mesmerized by it – and soon finds that the daughter of the woman in the portrait (France Nuyen) happens to be her mother’s spitting image. Moreover, the episode’s score by Morton Stevens – a lush, lyrical theme connected with the alluring full-size painting – appears in various guises, much like David Raksin’s classic tune. The episode is considered one of the very best in the series.

THAT WAS LAURA, BUT SHE’S ONLY A DREAM

A theatre play by David Zane Mairowitz quoting from the song, and making fun of forties and fifties films. Reviewed in “Hollywood Reporter”, 03/30/1973

Reynolds falls in love with call-girl Dominoe (Rachel Ward), who’s believed to be dead. Her “resurrection” AND the explanation that follows are borrowed from LAURA.

A documentary where the director follows Laura – a Brazilian woman who arrived in New York in the hope of leading the high life – from a film premiere at MoMA to the New York subways at night, and soon becomes a character in his own film, enchanted with this mysterious woman. As Barbosa’s intrigue grows, Laura begins to exploit him and his crew, playing a cat and mouse gone between subject and filmaker as he follows her antics of mixing with New York’s elite by night while cheating poverty by day.

The young Brazilian director has said that the name “Laura” alone evokes cinema, because of Preminger’s classic; his own Laura, the star of his documentary, is a woman of cinema, a femme fatale – and as obsessed with the movie herself, as he was obsessed with it. He finds that his own obsession is mirroring that of Mark in Preminger’s LAURA: he is a voyeur who follows her, trying to reveal her secrets and perceive her truth. A new bossanova rendition of David Raksin’s classic music theme was used in the documentary.