“They are not long, the weeping and the laughter,

Love and desire and hate:

I think they have no portion in us after

We pass the gate.

They are not long, the days of wine and roses:

Out of a misty dream

Our path emerges for a while, then closes

Theater had been a major part of Preminger’s life since he was sixteen, as well as a favorite source of inspiration throughout his whole career. Although among the least “theatrical” of film directors, Preminger has often set up the first scenes of his films as dynamic “tableaux”, using the latters to unveil the narrative issues at stake, and to also put the protagonist squarely “at home” in a subtly evolving milieu. Sometimes he even planted maliciously several hidden clues in these first scenes, clues that would assume their full meaning at the end – as in the case of LAURA.

What could be less “cinematic” than a black screen? And yet, since the early 40s, many films (REBECCA, LAURA, I WALKED WITH A ZOMBIE, etc) open in total darkness or in mysteriously foggy atmospheres, combining pensive “out-of-this-world” voices and music in order to catch our immediate attention, and to immerse us in a world of dreamy recollections and anguished questionings. The protagonist, still invisible and faceless, is all the more impatiently expected to materialize in a grand manner. But in the meantime his “ghostly” voice fully invades our conscience, making us totally receptive to his feelings, words and interrogations. His musical, hypnotic timbre induces a strong emotional rapport, making of us his willing captives.

LAURA’s credits unfold over the film’s key “prop” : the portrait of the “deceased”, a vibrant post-romantic homage magnified by David Raksin’s spellbinding musical theme, soon to be a standard. This graceful but slightly stilted representation of Laura will have to satisfy us, until the time we meet the heroine “in the flesh”. Later in the film, Waldo will inform us that the painter (Jacoby) was in love with Laura but unable to catch her radiance. Nonetheless, the model’s considerable natural charm works, putting us, viewers, in the right mood to savour the evanescent presence/absence of hers.

The luminous image of the heroine quickly fades out, and, following after a very short pause, the darkened screen envelops the first words of Waldo’s eulogy : “I shall never forget the week-end Laura died…”

What might such a voice have conveyed to an audience that hadn’t yet seen or heard Clifton Webb on screen? Let us try to dissociate if from the ascetic physique of Webb, so ideally suited to Waldo’s appearance. Let us try to react to those words, as if they were – and were – pronounced by an abstract entity; a ghostly figure reaching us through the night.

This light, supremely elegant timbre clearly belongs to a cultivated, refined man – one who cherishes words, picks them with unerring taste and precision to convey or mask his thoughts and feelings, to impress and dominate. Words are Waldo Lydecker’s favorite “weapon of distinction”. They strike, scratch, cruelly bite, literally leaving others speechless. This master of soliloquy would never bother to exchange ideas, he just wants listeners to appreciate his acid “bon mots”. He will be the one to have the last word – that is, until Laura turns her back on him. His ultimate declaration of love, at death’s door, will come too late.

To celebrate the most important (indeed, the ONLY one) love of his life, the old, allegedly reformed misogynist and certified misanthropist can’t do any better than talk about… himself. With his “I shall never forget…”, he invites us to share his reminiscences, thus putting himself firmly at the centre of the narrative. A position that will however be challenged in the middle of the following 90-second opening shot…

Camera shows the back of a big transparent display cabinet. An impressive collection of glasses, crystal, a precious flask, etc. 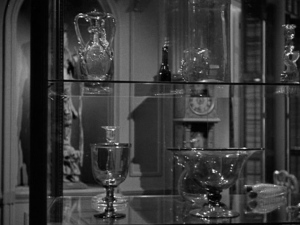 Traveling continues slowly, revealing a rare model of a “grandfather clock” (visual CLUE given here: a comment will quickly indicate that Laura has the SAME clock at her place.) Waldo comments on his loneliness in the deserted New York, and the poignant feeling of loss since “Laura’s horrible death”). 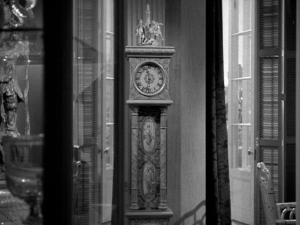 Through shutters of a half-open French window: a sunny terrace… 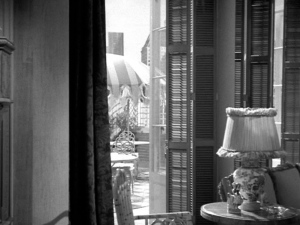 Camera now pans to the right, showing other French windows of that luxurious salon, all half-closed, as well as its furniture: a large sofa, a crystal chandelier, etc.

A significant change occurs NOW. Until then, the viewer felt immersed in the stilted, suspended time: the immobile PAST of remembrance, melancholy, morbid delectation. The PRESENT swiftly breaks in on screen, when inspector McPherson is revealed in medium long shot…

Despite his affected nonchalance, McPherson is intrigued by this singular environment. Until now he was more familiar with lower class crimes. His presence seems a little odd in that elegant, “lavish” home of a refined egotist, collector and lover of inanimate beauty.

McPherson’s presence reminds us that there is a rough, “vulgar” world beyond that luxurious, protective setting. One thing is clear, Waldo hates being intruded upon: “I had him wait”, says he, clearly piqued.

Camera  pans up and right, to a closer shot of Mark, looking at exotic masks hanging on the wall… 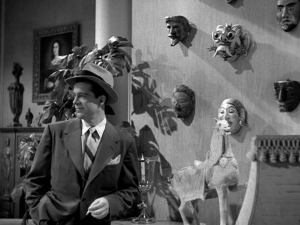 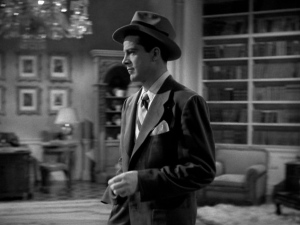 Since the start of this long take, the camera moved continuously from LEFT TO RIGHT. This sudden INVERSION signals that McPherson is now emerging as an active “movement initiator”. Space “folds back” around new axis, thus making McPherson  the center of attention until the end of the take: the space that had been Waldo’s exclusive domain now seems to “belong” to McPherson. 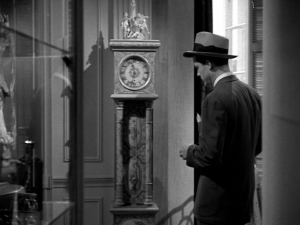 A short tracking shot “reframes” the  back of the display cabinet. McPherson studies Waldo’s precious glass collection from behind the sliding door…

The camera stops. McPherson opens the cabinet and boldly extracts one of Waldo’s most precious possessions…

Waldo (off-screen, sharply): “Careful there, that stuff is priceless”

McPherson casually puts the crystal flask back inside,

and walks towards the BATHROOM, on a brief right-left pan

We briefly see him open the door. END OF the 90-SECOND TAKE